To honor a few requests to do so, I dug this bad boy out of the archives.  Enjoy!

Yesterday was Jamie’s birthday and I managed to throw a cake together with items I had on hand.  I only had a couple of hours before he came home from his last day of school, so I knew better than to get crazy.  This got me thinking about the cakes I’ve made over the years and how a few episodes of Cake Boss had me convinced I could be a pro without of lick of training.  I have had a couple of successful-ish attempts, but lest you think I suffer from delusions of grandeur, I will come clean today.

My favorite blog is cakewrecks.com and I’m sure that, were I a “professional” baker, I would be heavily featured on Jen’s list of the worst.  For twenty years, while on any project, I have reminded myself of the words my friend Carrie once spoke to me; “You have a tendency to get a little carried away and go over the top.  Not always in a good way, so put the paint brush down.”  Or something like that.  Though I’m sure I was offended at the time, truer words were never spoken.  While I try to remember these words, I only listen to them about 50% of the time.  Sometimes, it’s okay to run to the store and buy a cake.

So today I take you on a journey of discovery, mild success and embarrassment that will hopefully not drive you away from this blog forever.  Hey, I never said I could bake.  I just cook and build stuff.

This may have been my first attempt at working with fondant and if I’m not mistaken, I was pretty proud of this travesty.  From the shiny, drooping golf bag to the worm-like bridge over the stream and the overall lumpy shape, I look back on this one with shame.  Even my Finnish flag is sad and you would think it would be tough to screw up a blue cross (Jamie’s family is Finnish).  Hey, I like the graham cracker sand traps though.

I was asked to do this one for my late, great uncle’s 80th birthday and ultimately, I was pretty proud of it.  I thought the deer, sleeping hunter and other little touches turned out fairly cute, but the cake tasted, um, not great.  The fondant I used killed any hope one had of actually tasting the cake or frosting (I have never found a fondant recipe I like and I will gladly accept any and all suggestions).

Thankfully, my family is kind and professed to love it, but I wasn’t fooled.  A toilet paper cake may have been more palatable.

Though technically not a cake, this gingerbread TARDIS was a pain in the keister to make, but I was proud of it.  Upon further inspection, however, I realized that the actual TARDIS is not quite as lumpy and misshapen as my gingerbread version, nor do brown bits show through anywhere on the original.

If memory serves (I haven’t watched the show in a couple of months), the real TARDIS also had a light on top which does not resemble a blue nipple-tipped boob you see here, but I could be wrong.

And don’t even get me started on my handwriting.

Andrew begged me to make him a Minecraft cake a couple of years ago and since he’d never asked for a specialty cake before, I was happy to do it.  One would think that blocks and simple construction would be a breeze, but that did not prove to be true for me.  My fondant handicap struck again and I ended up with a mess of uneven squares and a general appearance of chaos.  I even placed it on the busiest platter I own to finish the assault on the eyes that was this cake.

Thankfully, Andrew approved and it actually tasted fairly decent.  At the very least, we had a sugar rush for breakfast over the next couple of days.

My mother, like all mothers, God bless them, will sing praise to this cake all day long, but I know the truth.  It’s hideous.  This was supposed to be a representation of my mom and some of her favorite things, but her modeling chocolate double ended up looking like the love child of Charo and Steven Tyler (my actual mother resembles neither).

In my defense, my parents were scheduled to arrive at our house to celebrate at 6pm, but my father is a “do it now” kind of guy and Mom called to say that they would arrive between 2 and 3.  I hadn’t made any of the figures at this point and I panicked, rushing to finished this shiny, sloppy mess.

I think this one may have been my second attempt at fondant, still tasting “meh,” but I liked the look of it, for the most part.

Again with the shininess, but overall, I can’t hate on it too much and my son loved it.  I don’t know that I would want to stick plastic toys into a cake again, but this theme was a great way to salvage cake that had fallen apart coming out of the pans.

Time and time again I find myself rushing to finish a cake because I love to play and I’ve convinced myself it’s less expensive to bake a cake than buy one.  Somehow I forget the four trips to the cake decorating store usually required.

Anyway, this is another one that I threw together for my mother in a day.  The store-bought buttercream was so soft and would droop, leaving gaps where the cake peeked through.  Genius that I am (can you hear the sarcasm?), I added more icing on top to fill in the gaps left by the ribbons heading south, ending up with an inch-thick frosting layer around the sides of the cake.  Don’t even get me started on the ribbon quality or color choices.

Thankfully, my mother and I love icing and I skipped the fondant, so this one at least tasted yummy. 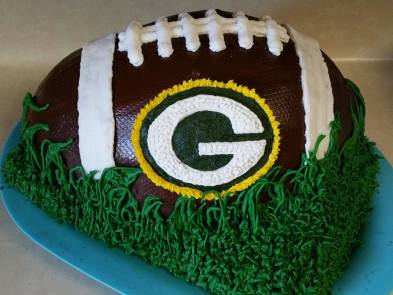 I admit to being somewhat proud of this one.  Crooked stripes and imperfect oval aside, I think I delivered what Andrew asked for on his last birthday.  The best part was that I stuck to my guns, abandoning fondant and going with straight buttercream, so it actually tasted great.

I was able to use a mesh laundry bag (bleached and clean) to leave the tiny pigskin pattern in the buttercream, further convincing me that my decision to walk away from fondant was the right one.

The Ugliest of the Ugly: The Loathsome Last Minute

Okay, here we go.  This last cake is so bad that I almost didn’t include it.  I would love to tell you that I made it years ago and didn’t have any experience, but sadly, I made it for Jamie’s birthday…yesterday, as I mentioned earlier.  I had two hours, during which I was working on some other projects, so I was spread a little thin, but I opted to bake rather than buy.  I am an idiot.

I had a strawberry cake box and strawberry frosting in the pantry that I had picked up for emergency quickie cupcakes, so I got to work.  The baking and stacking went fine, but my first mistake was putting the cake together in a box too small to fit my decorator tips into, let alone my hands.  Two sides of the cake were unreachable, so I was dropping the icing in from about three inches high.

Again with the store bought icing.  I had to try to turn pink icing into something more “manly,” but after an hour of blending reds, I got bupkis.  Still pink.  This is when I decided it was over and that I would go straight “eye sore.”  I decided to decorate the whole thing with my runny frosting and use some black cake spray paint I had gotten a little while ago.  The ribbons…ugh, I can’t even.

So, yeah, I totally gave up and decided I actually was in the pursuit of not just eye sore, but completely ugly.  I mean, who doesn’t like a good laugh, right?  Okay, okay.  I’m done making my excuses.  Prepare yourself.

I give you the poopy, brown mess!

I suppose I will leave the baking to the pros.

7 thoughts on “Cakes: the Good, the Bad, the Ugly and the Inedible”