Three and a half years ago, having sewn only a few buttons back on since Junior High, I decided I needed to get myself a sewing machine.  I was becoming a canner, a gardener, a plumber, a painter and such, so I decided to add seamstress to the list.  Sadly, after purchasing an inexpensive machine on Amazon, I realized that our old house was only 1000 square feet, with nowhere, I mean nowhere, to fit a machine.

The poor, abandoned Brother longingly called to me from its place of solitude and neglect in the air conditioned little pump house where I was forced to store my canning.  Its box, never opened, collected dust and when we finally moved to the bigger house, I swear it was lighter with the excited anticipation of finally being released from its prison!

Alas, this was not to be.  It was three years, almost to the day, before I took out a box cutter and unleashed the beast.  I was building a cat tower for my brother and his fiance and I couldn’t find the right pillows for the houses, so I decided to try my hand at sewing my own.  I’m telling you right now, it wasn’t pretty and there will be no pictures of those pillows. 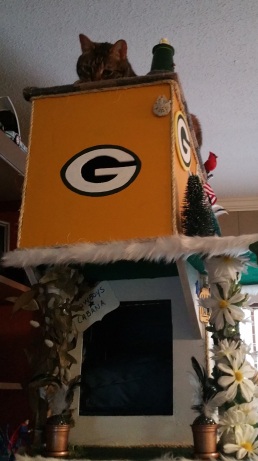 Wondering about the pillows… 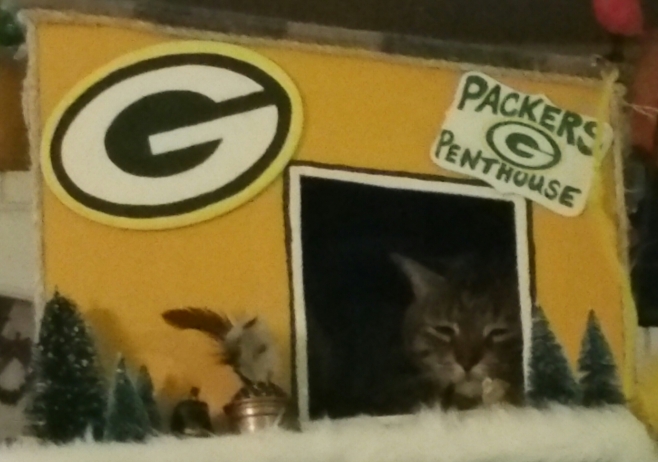 Anyway, I sewed my own and they were functional.  I then decided to make an easy fur cape for my niece.  Ha!  Easy?  Um ,no.  I chose fleece and made it reversible which was crazy, overly ambitious for a first attempt at a garment (Luckily, she is five and easy to please).  I sewed gift bags and stockings for the holidays, mended some clothes and the ball was rolling.

I soon realized that with my new hobby came the loneliness of confinement to the dining room, as that was the only available table.  I priced sewing tables and almost fainted at the prices I found.  A machine which cost less than $200 most certainly did not belong on a $1000 table, so I figured I would build my own.  As I often do, I was flying by the seat of my pants, a plan in mind and even a sketch with measurements, but the seat of my pants nonetheless.  I wanted somewhere to keep the machine without constantly having to move it out of the way and would allow me to still be in the same room as the rest of my family.  Here’s what I came up with: 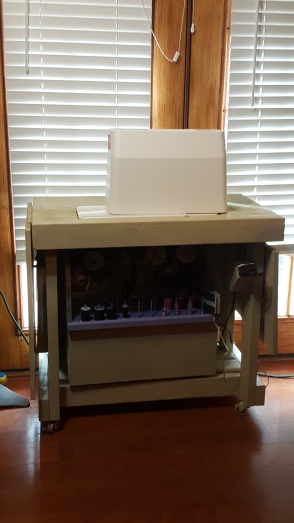 I put this little table on casters so I could move it around and added three drop leaves for plenty of work room.  Currently, it resides in our living room, behind the couch which allows my ADHD to run free during family movie night, for example.

It’s not quite finished yet (it needs another sanding and coat of paint), but it is very functional and that was the goal.

I’ll show you the specifics and give you some ideas if you are thinking of building your own.  Sadly, my original sketches and measurements are all gone, but I can answer questions, should you have any.

The first thing I did was to make sure I had strong boards and framing to work with.  I just grabbed a couple laminated pine boards from Home Depot and already had the 2×4’s, 2×2’s, 1×2’s, hinges (save the long ones) and screws at the house from previous adventures, so shopping was relatively painless.

I built the frame of the table using 2×4’s and 1×2’s, using salvaged slats from old projects for the base.  I had built the hideous box you see underneath in a successful, if not pretty effort to organize my sewing paraphernalia a few weeks prior, but it weighed a ton so the base had to be very strong. 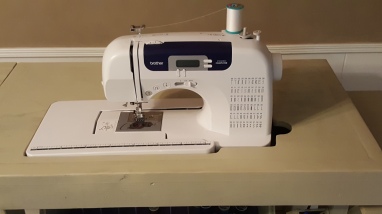 Before attaching the table top, I traced the outline of the machine, making sure to leave room for the cords and to access the power switch.  I then cut out the area with a jigsaw, making sure the machine would fit before attaching to the table.  Underneath the large cutout, I used a solid board and drilled holes through which the cords for power and the foot pedal could run.

My original plan was to have one drop leaf on the left side of the table where I could place the materials I fed through the machine.  Having the small zoo that we do, it’s vital to keep things off of the floor since, no matter that I vacuum daily, I could knit sweaters with the cat and dog hair collected. 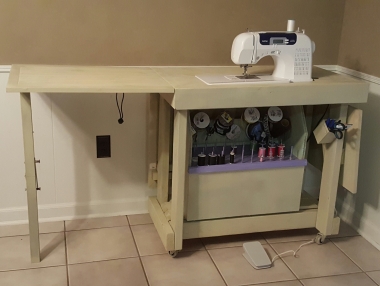 I attached the leaf with a long hinge and the leg with a smaller hinge.  I knew I had to get creative here because this leg was too long to simply fold up, so I had to cut the leg in half and hinge that as well.  This particular part of the project almost drove me to drink, which is why I always recommend that, when you reach this point, you walk away.  Take a hot bath, eat something, scream into a pillow, whatever it takes to keep your head from exploding.

Anyway, this is what I ended up doing: 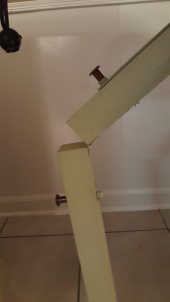 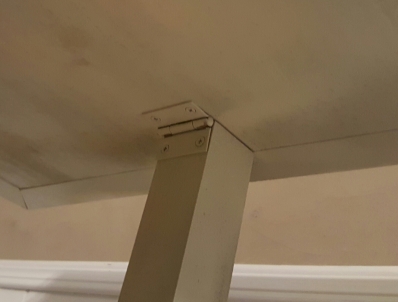 Hinged to the drop leaf 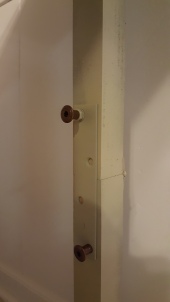 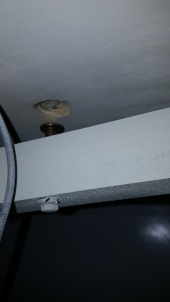 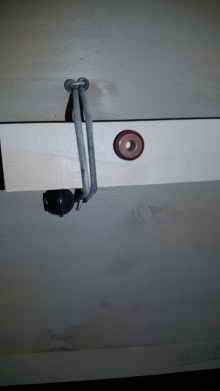 Folded and secured with bungee to a hook 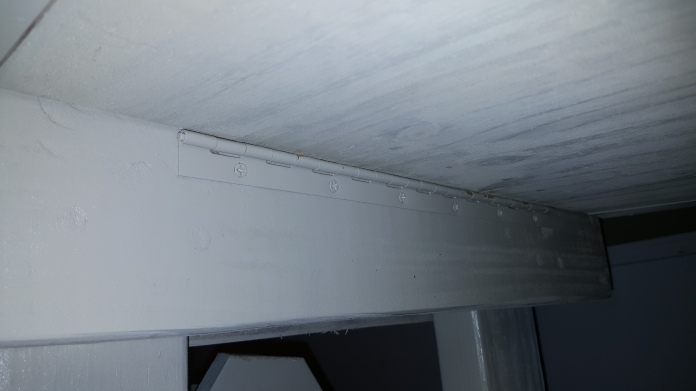 Hinge used to attach to table 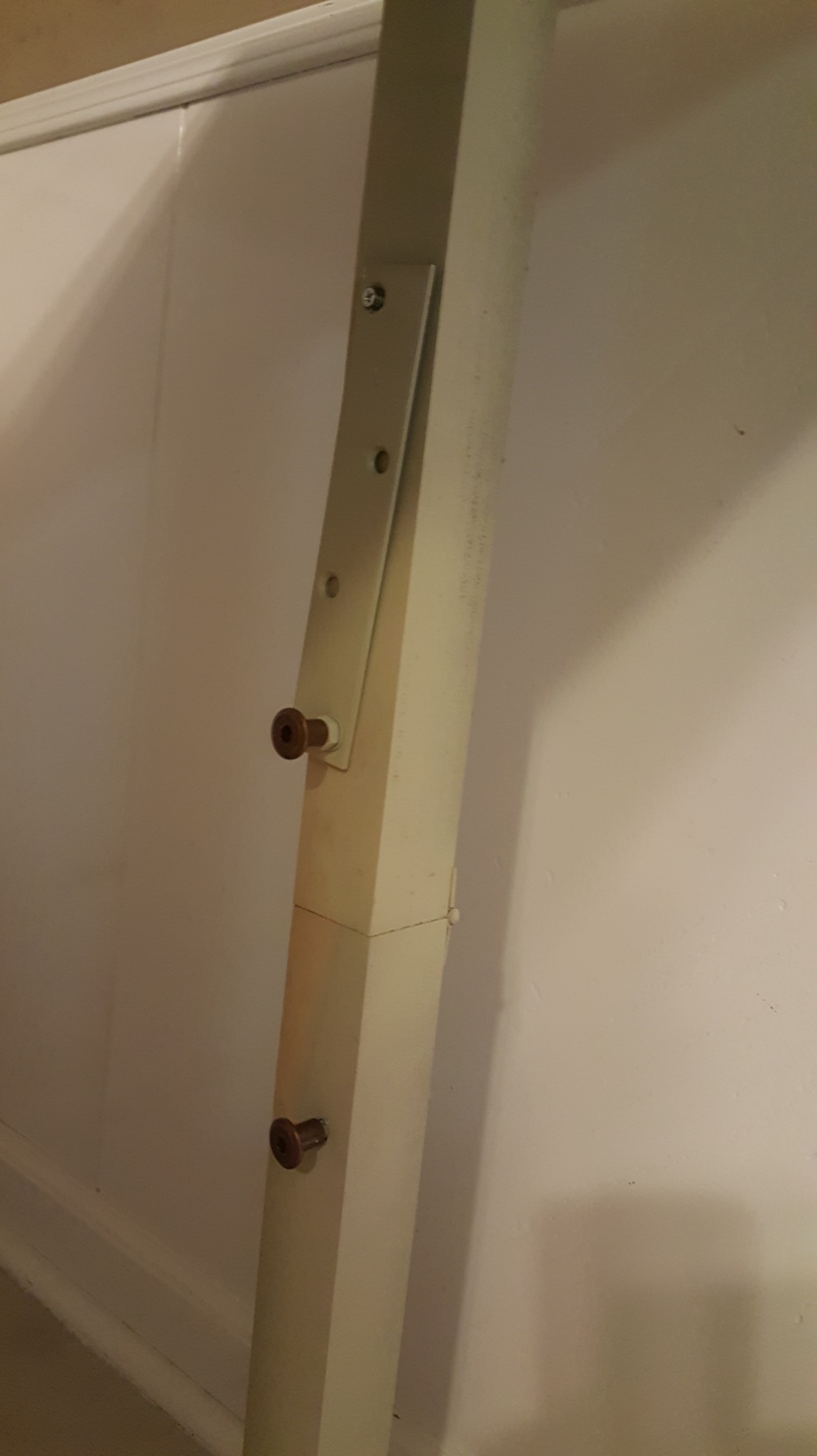 Again, not pretty, but functional.

Not sufficiently aggravated by how long it took to come up with this part of the table, I decided to add an even bigger leaf which I could use for cutting, etc.  This one would need two legs, but thankfully was big enough for the legs to be hinged only to the table and did not to require my going full-MacGyver. 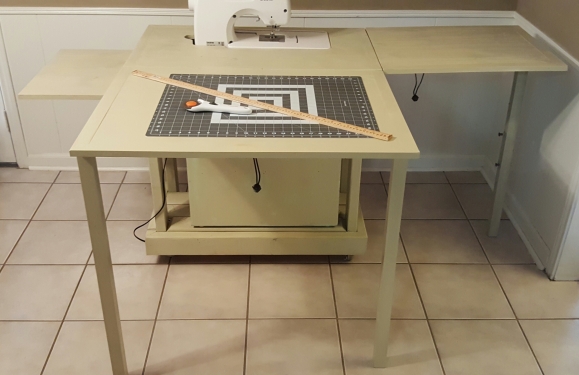 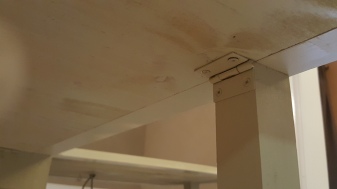 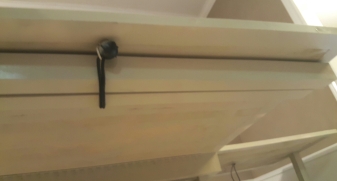 Legs folded and bungeed. Notice that the legs are slightly offset to allow them to close flush to the underside. 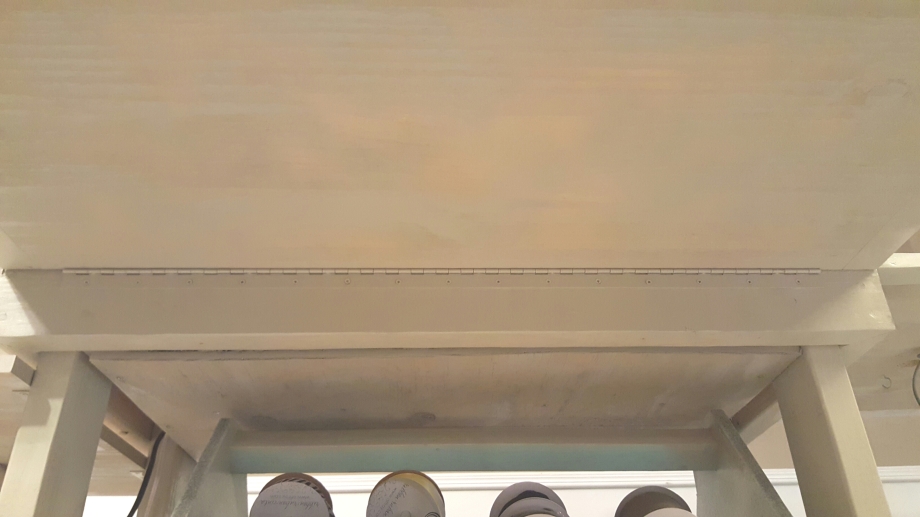 If you know me, then you know I wouldn’t last five hours in the desert.  Not because I’m not a total bad a$$ survivalist, but because I cannot go half an hour with a drink of water.  This prompted the need for a small drop leaf on the right side of the table where I could keep my water, my phone and other items.

Because I was trying to be frugal and the leaf didn’t need to be very large, I used the small board that I had left from cutting the rest of the table tops.  Knowing myself all too well, I also knew this leaf had to be lower than the others, keeping my glass and other items out of the reach of my unparalleled ability to spill and break things (lost my phone insurance twice for too many claims after shattering screens by briefly removing the cases to clean the screen.  Who knew two claims a year was the max?  And don’t even get my husband started on all the liquid I’ve spilled over the last fifteen years).

There was no way to get a leg attached to this leaf since it would have needed to be very short and I wasn’t going through a repeat of the hinge battle which had raged within me on the left drop leaf.  After much debate, trial and error and more than a little cursing, I ended up with the following: 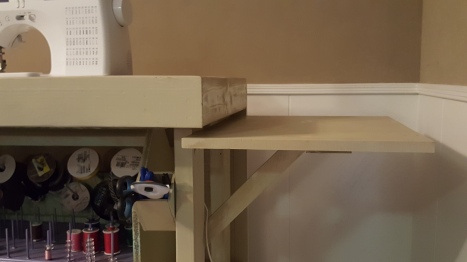 Leaf is lower to avoid mess

Arm fits into a notched piece of wood under the table.

Lifting the leaf, the arm slips out and can be swiveled out of the way

Closed leaf is out of the way

And that’s it.  I strongly recommend giving this a shot if you are in need.  The whole project cost me less than $120 and took little time to complete.  It’s been nice to feel like I’m still a part of things with the family, even when I’m on the machine for hours, and I love the flexibility of this thing.

Here it is again in it’s full glory: 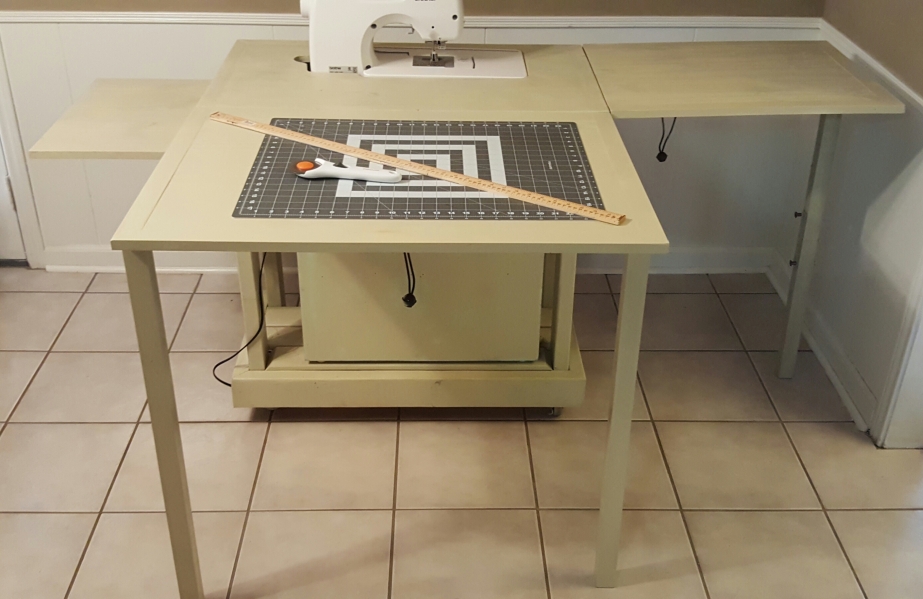 One thought on “Sew You’re Tired of Working in Solitude?”